Pueblo is a charming little city in Colorado, on the banks of the Arkansas River. In the past, Pueblo had a reputation for being chaotic, especially during the gold rush. The so-called “Steel City” has always been crucial for the mining industry in the US. Thus, it was normal to see cowboys trying to make a fortune on its street. Think Western movies!

However, nowadays, people visit Pueblo because of its historical sites, including several dedicated to veterans. After all, the city is also known as the “Home of Heroes” since it was the birthplace of four Congressional Medal of Honor recipients. Others travel to Pueblo because of its natural attractions that allow them to escape the hustle and bustle of bigger cities.

In this post, we’ll cover up 25 things to do in Pueblo, so you know exactly where to go and what to visit in this lovely city that has so much to offer.

Interactive Map of 25 Things to Do in Pueblo (CO)

Lake Pueblo State Park is the biggest in the city, and it is a 10-minute drive west from downtown. Most people visit it to fish. Yet, with 60 miles of shoreline, lakes, and a beach that opens on Memorial Day weekend and closes Labor Day weekend, there’s tons of swimming and sailing in the park. With so much to see, you’ll learn fast that one day in the park is not enough. Luckily, there are also picnic areas and camping options.

Historic Arkansas Riverwalk is in downtown Pueblo. Here, you can take a 30 minutes cruise through the Riverwalk’s channel, a great way to learn about the history of the city and the 1921 flood. You’ll also find the Veterans Bridge and many art pieces. The Riverwalk hosts events like the Holiday Lighting Extravaganza, a Chile and Frijole Festival, and the Big Bear Riverwalk Brewfest, among others. This is a lively area, with upscale restaurants, luxury hotels, and bars.
Tip: If you’re planning a romantic getaway to Pueblo, try walking around this area at sunset.

Union Avenue Historic District is the most picturesque area of Pueblo. This old neighborhood used to be the city center, and, as such, it housed brothels and sketchy bars during the gold rush. But, currently, the antique brick buildings in the district are home to chic boutiques. This area is also part of the Creative Corridor of Pueblo, so you can find tons of art galleries and cafés here. The sound of live music and street performers mixed with the vision of sculptures and fountains make this one of the most beautiful parts of Pueblo.

The Rosemount Museum is a 5 minutes drive north from Historic Arkansas Riverwalk. This stunning mansion turned into a museum dating back to 1893 and has 37 rooms. Rosemount Museum is famous for being home to John A. Thatcher and Margaret Thatcher. Most of its furniture and objects belonged to its original owners, so you’ll feel like a time traveler. At Christmas, the decoration makes the mansion cozier. Furthermore, all tour guides are volunteers who are passionate about the Rosemount Museum.

The Neon Alley is one of Pueblo’s most colorful places. This attraction showcases over 40 vintage neon signs donated by collector Joseph Koncilja. Although it is in the central Union Avenue Historic District, this is Pueblo’s best-kept secret. Because of city laws, the neons can’t be on buildings facing the street, but they CAN be on this hidden alley! If you’re looking to get some good photos for your Insta, this is the place to go. The contrast between the shiny neon and the brick buildings is pure magic.

To know Pueblo’s history, you must visit the Steelworks Museum of Industry & Culture. This museum is key to understanding the role of the city during the Industrial Revolution. The exhibit will take you on a journey through Pueblo and Colorado’s steel industry. This museum is south of Pueblo, in the Bessemer neighborhood. To enter, you’ll have to pay 6$ for adults and 4$ for children. The museum opens from Monday to Saturday, from 10 AM to 4 PM

Pueblo Weisbrod Aircraft Museum (PWAM) has an impressive collection of airplanes. Yet, with over 85,000 square feet, there’s plenty more to see! The PWAM’s two hangars also exhibit weapons and uniforms related to aviation history. The oldest artifacts in the museum are from WWI. The museum is 6 miles east from Pueblo, adjacent to the Pueblo Memorial Airport. Pueblo Weisbrod Aircraft Museum opens from 10 AM to 4 PM from Monday to Saturday. On Sundays, it opens from 1 to 4 PM. The price of the tickets is 10$ for adults and 7$ for children.

Carrousels, small roller coasters, pools, tennis courts, a zoo… Pueblo’s City Park has it all! Whether you visit the city for a family trip or a romantic getaway, you will find something to do in this park. The park is west of downtown Pueblo.

No list of things to do in Pueblo would be complete without mentioning the city’s zoo. Pueblo Zoo has over 400 animals and is a must-see during a family trip. Among the 125 different species you can see, there are otters, penguins, and lions, among others. The zoo is also involved in the conservation of endangered species like red pandas. Admission tickets to Pueblo Zoo cost 12$ for adults and 10$ for children. This zoo opens all year round and is inside City Park.

To dive into Pueblo’s cultural movement, you can visit the Steel City Theatre Company. Besides its regular theater plays, this is a great place to dine. As such, it is an unmissable venue for anyone looking to enjoy live performances AND good food. The Steel City Theatre Company is in the downtown area. There are also regular workshops and classes that you can take here, and not only related to theater.

Pueblo is the nearest city to the San Isabel National Forest, one of the eleven of its kind in the state of Colorado. This breathtaking forest has peaks like Mount Elbert, with over 14000 feet (4,267 m) in height. Among the many activities you can do in the forest, there’s a hiking, mountain biking, and fishing. The forest is a hot spot for outdoor enthusiasts. To get there, you’ll only have to drive for about 10 minutes northwest of Downtown Pueblo.

Honor Speedway is in the northern part of Pueblo. This 1/4 mile dirt track hosts races that gather lovers of speed and, of course, cars. Among the categories in Honor Speedway, there are Sport Compacts and Sport Mods. The Grandstack ticket prices are 12$ for adults and 5$ for kids. But, for special events, tickets cost 15$ for adults and 8$ for children. This is one of the best things to do in Pueblo to see a different side of the city.

Pueblo Heritage Museum is close to the Historic Arkansas Riverwalk, in central Pueblo. Also known as the Heritage Center, this museum houses items from the city’s past. From the 1921 flood to the depression era, this museum is like an extended look at Pueblo. The museum is open from Tuesday to Saturday, from 10 AM to 4 PM. The admission costs 6$ for adults and 4$ for kids.

Walter Brewing Company is the oldest of its kind in Pueblo and is in the central part of the city. The company first opened in 1898. During a visit, you’ll learn about the obstacles this brewery has faced to stay open for so long. You’ll also be able to taste refreshing craft beers of different kinds. The brewery works from Monday to Saturday and sells delicious food on theme nights.

If you love to go off the beaten path, you have to visit Fountain Creek, 10 minutes north from downtown Pueblo by car. This stream starts in Woodland Park, runs through El Paso County, and joins the Arkansas River in Pueblo. It is a 74.5-mile (119.9 km) long stream surrounded by scenic trails. This is another beautiful natural attraction to check out during a stay in the city.

Heroes Plaza is close to the Riverwalk and honors Pueblo’s Medal Of Honor recipients. How? With statues of four soldiers: Drew Dix, Carl Sitter, William Crawford, and Murphy. Next to the Heroes Plaza, you’ll find the Pueblo Convention Center.

Drive 10 minutes northwest of downtown Pueblo to find Nature & Wildlife Discovery Center. The views of this place alone are worth it. It is on the banks of the Arkansas River, in the impressive Rock Canyon. But that’s not all! Inside, there’s a rehabilitation center for birds of prey that is a must-see, especially if you love animals. Nature & Wildlife Discovery Center opens from Tuesday to Sunday, from 9 AM to 4 PM. To enter, you’ll have to pay 5$.

The Chile & Frijoles Festival takes place every year in late September. This event honors two of Pueblo’s favorite crops: Green chiles, and frijoles or pinto beans. Besides cooking competitions, there’s live music, arts and crafts, and entertainment. The festival’s location is the Historic Arkansas Riverwalk, and it started in 1994. The price of admission is 5$.

The Pueblo Railway Museum is in the central part of the city. As its name suggests, this museum exhibits locomotives and equipment from railroads. Its most precious object is the Santa Fe 2912, from 1944, one of the largest Northern type steam locomotives. This museum is open from Tuesday to Sunday, from 10 AM to 4 PM. The ticket price is 4$ for adults and 3$ for kids.

Grupo Folklórico is Pueblo’s folk dance group, so they’re always performing around town. Watching their recitals is an unmissable cultural experience! If watching is not enough for you, you can join their dance classes.

The Mineral Palace Park is one of the nicest parks in Pueblo. You may see tons of pictures of its beautiful bridge before visiting the city. The park is north of downtown, and it housed a palace in the past that represented the city’s mineral wealth. But, over the years, the palace closed due to the bad conditions of the buildings. Nowadays, this is a peaceful green lung that is photo-ready at all times.

Sangre de Cristo Arts & Conference Center is in the heart of Pueblo. In its facilities, there’s the White Galleries and Buell Children’s Museum. The galleries have a permanent collection of contemporary art. The Children’s Museum has interactive exhibitions. This center is open from Wednesday to Saturday, and tickets cost 10$ for adults and 8$ for children. The galleries work from 10 AM to 3 PM, while the Children’s Museum operates from 10 AM to 12 PM and from 1 to 3 PM. There are performances in Sangre de Cristo Arts & Conference Center throughout the year.

The Runyon Lake is east of downtown Pueblo. Like other natural attractions on the list, the scenery of Runyon Lake is enough to visit it. Still, there are many activities that you can do in the 5-acre lake and its surrounding area. Although swimming is not allowed, you can fish and use non-motorized boats. Bird and animal watching is also a great thing to do in Runyon Lake since there are so many different species. To get to the lake, you’ll only have to drive for about 4 minutes.

Our mission is to provide you with travel ideas. We will help you discover destinations and turn your trips into reality. 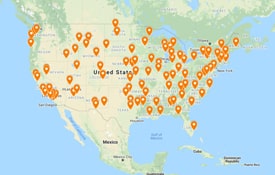